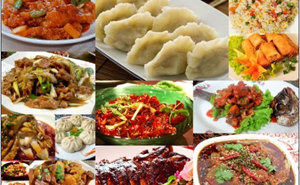 Throughout China’s long history, new additions to Chinese cuisine have been created. During the Qing Dynasty (1644 – 1911), the art of Chinese cooking was at its best. A banquet called Man Han Quan Xi is representative of the excellence that Man and Han cuisine offers, as it includes many different dishes that have their own unique appeal and flavor. The food’s presentation and preparation exemplifies the culinary arts and Chinese culture that have evolved over the centuries.

One may certainly describe Chinese cuisine as being dainty in terms of atmosphere and aesthetics. Due to the assortment of different climates, geographical regions, and other factors, Chinese cuisine has been categorized into the “Eight Cuisines” and “Four Flavors,” but the subcategories are still increasing because catering is a living art. Within each cuisine field, skilled chefs are able to use something as simple as a melon to create dozens of different dishes of different flavors. Local specialties are also indicative of an amazing taste and philosophy. Just as the Han people have created their own cuisine, many minorities within China have also contributed to the evolution of their own superb appeal and traditions.

In Chinese cuisine there is a harmony of taste, color, redolence, fineness, and presentation. While cooking, chefs select prime ingredients and use a variety of seasonings. Some of the many skills they employ that they have learned from their family include braising, boiling, frying, simmering, stewing, crisping, baking, steaming, and so forth. The final step is to present the food in an appetizing and aesthetically appealing manner so that it is not only the taste and smell, but also the visual presentation, which makes the food incredibly appetizing.

There are a variety of occasions in which cuisine is an integral part. For example, anything from a wedding to a religious rite may include certain snacks or meals. A skilled chef is marked by their ability to provide a healthy, satisfying dish to suit any occasion. Prolonged life, increased energy, and good health overall are the results of eating good cuisine, and therefore it has some connection to Chinese medicine. Additionally, good cuisine has a distinctive flavor and appeal within certain ethnic groups.